The 1909 Cape of Good Hope Official Handbook, by town clerk Finch, describes the City Hall in Cape Town as being in the Italian Renaissance style. Hans Fransen, in his Guide to the Old Buildings of Cape Town, sees a French Renaissance influence. It may owe more to Leeds Town Hall, in the UK, but a connection with something as pre-eminent as the Italian or even the French Renaissance is not to be sneezed at, a decent provenance being essential even in the colonies.

It was thought originally that such an ornament to the city would be a fitting tribute to Queen Victoria in the year of her Golden Jubilee, 1887. Massive, dominated by an enormous clock tower, the City Hall is also a fitting symbol of an empire at its pinnacle. Cape Town was one of the last colonial cities to acquire a civic hall and it came into being full of the majesty of empire – the last major Victorian building to be erected in the city.

Occupying an entire city block, its setting is extraordinary. The conceptual juxtaposition of the unique site, set dramatically against a backdrop of Table Mountain and fronting onto the historic Grand Parade, with the nearby Castle of Good Hope reinforcing its strategic importance, ‘was inspirational’, writes former Cape Town Mayor, David Bloomberg. Essentially it replaced the little (by comparison) baroque-style Town House on Greenmarket Square about which everything was wrong for busy civic offices, and it is the result of a competition, held by the Cape Town Municipality in 1894, to which there were 17 entries. The winning scheme was by Harry Reid and Frederick Green, although the original design appears to have been very different from what was finally built. The Grand Hall, for instance, was then entered through the front of the building, which was also only two floors high. However, the new building was slow in going up: difficulties of the site, as well as the Anglo-Boer War, seem to have held up its construction until 1905. During these delays it seems that the present design materialised. 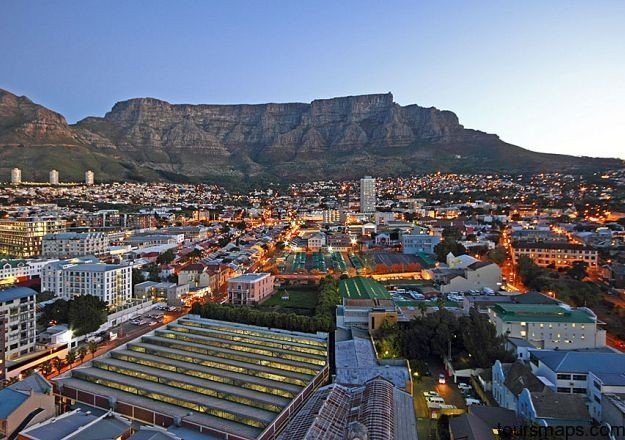 The richness of this building only really becomes apparent once you’re inside – particularly the Grand Hall with its elaborately decorated ceiling and overwrought stuccoed wall surfaces. There were no compromises: marble columns, magisterial marble staircases, teak woodwork, well-proportioned offices, a dignified council chamber, with a press and public gallery, ‘inspired pride in the citizenry and a building was born that in every way identified itself as Cape Town’s City Hall,’ continues Bloomberg. As a result, the city’s epicentre moved from Greenmarket Square to the Grand Parade. The Grand Hall became the premier venue for family, civic and national celebrations, concerts, balls, religious services, eisteddfods, political meetings, protests and sporting events. In 1947, the Grand Hall was decorated in preparation for the visit by the British Royal Family – an event that inspired the redecoration of the Mayor’s Parlour in a Cape Dutch style. Here too, the Cape Philharmonic Orchestra continues to play, over the years having attracted, amongst others, conductors and musicians such as Sir Thomas Beecham, Igor Stravinsky, Sir Charles Groves, Claudio Arrau and Yehudi Menuhin.

In its planning, it seems that the city fathers were unwise in providing insufficient space for a burgeoning municipal bureaucracy, and the lack of office space led to a post-war plan to demolish the City Hall and replace it with a bland, modernist box. Ultimately, the bland modernist box was duly constructed on the foreshore and the City Council decamped there. The City Hall was vacated by all but the orchestra. Today it fulfills a variety of peremptory functions and it has been all but mothballed. While the exterior was restored some time ago, its interior is still awaiting a new lease of life.

The Grand Hall, 130 feet long, 61 feet wide and 55 feet high, was designed with a view to holding ‘musical festivals, meetings of citizens, banquets, balls etc, ’ said the programme. The hall contains seating for 2 000 people and is encircled by a promenade corridor with four swing doors on each side.

The building’s corridors are lined with teak panelling, and the floors are of mosaic. The Mayor’s Parlour, on the first floor, received a makeover in time to welcome King George VI, Queen Elizabeth, and the princesses Elizabeth and Margaret, in 1947. Panelled in stinkwood and yellowwood, a jarring note today is the bizarrely patterned carpet. Antique Delft china and locally made antique Woodstock glass fill the shelves. The bronze bust is of former mayor Abe Bloomberg (1945-1947). King Edward VII and Queen Alexandra, committed forever to stained glass. A portrait of Mrs Bloomberg, by society portrait painter Terence McCaw, one of the unsung heroes of South African art.

In the Mayor’s Parlour, controversy surrounds the origins of the Louis XV clock seen above the fireplace. Is it the one purchased in 1805 for the Council Chamber in the Old Town House, the one that went missing for about 60 years only to have been found in 1887 lurking in a forgotten cupboard, and then moved in 1905 to the new City Hall? Who knows?

The fireplace in the Council Chamber, a design hybrid if ever there was one, features a bit of Cape Dutch, some Arts and Crafts and a smattering of neoclassical.

The former Council Chamber is now given over to a variety of different uses as the authorities make up their minds about the building’s future.

At one time, the clock in the turret that soars way above the rooftop struck the hours and chimed the Westminster quarters. The time is shown on four iron dials ‘filled with best opal.