Even no BBQ area, Repulse Bay Beach can be counted as one of the best beaches in Hong Kong. Above all, gorgeous buildings surrounding the beach and a temple of Tin Hau stretching into the sea, make the beach a quite different one from the others. If you take a bus only with your swimming suit, Repulse Bay Beach will never get you down. 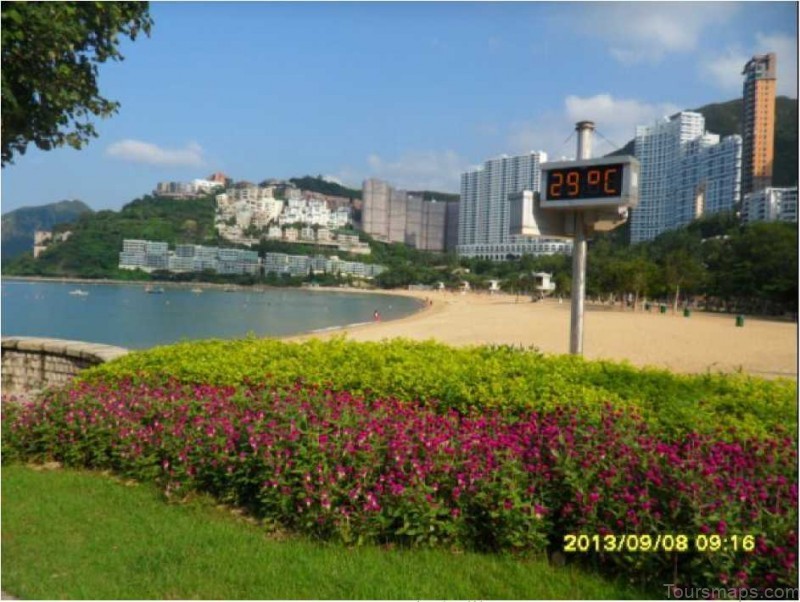 The beautiful beach of Repulse Bay

Repulse Bay Beach is situated next to Deep Water Bay. 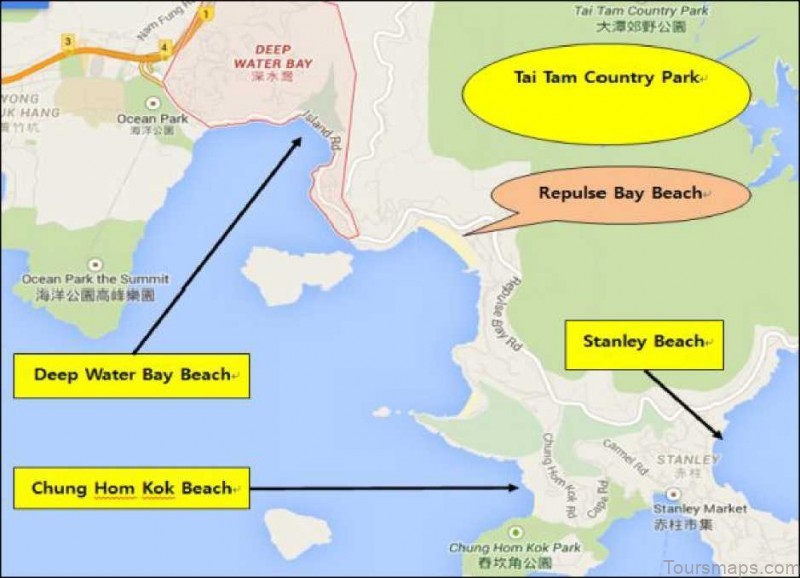 Bus no. 6, 6A and 66 also stop at Repulse Bay Beach but not at Deep Water Bay Beach. However, bus no. 6A does not operate on Sundays and public holidays. 6A runs only at morning peak time on weekdays and Saturdays. Bus no. 66 runs weekdays only.

Leaving Central Exchange Square Bus Terminus, no. 260 goes to Repulse Bay Beach via the bus stop of “Admiralty Station, Queensway”. It also stops at Deep Water Bay and Stanley Village but not Chung Hom Kok Beach. Its destination is the same as no. 6X, Stanley Prison. Different from the route of bus no. 6X, no. 260 does not stop at Chung Hom Kok Beach. Therefore, you can take any bus of 6, 6A, 6X, 66 and 260 for Repulse Bay Beach. 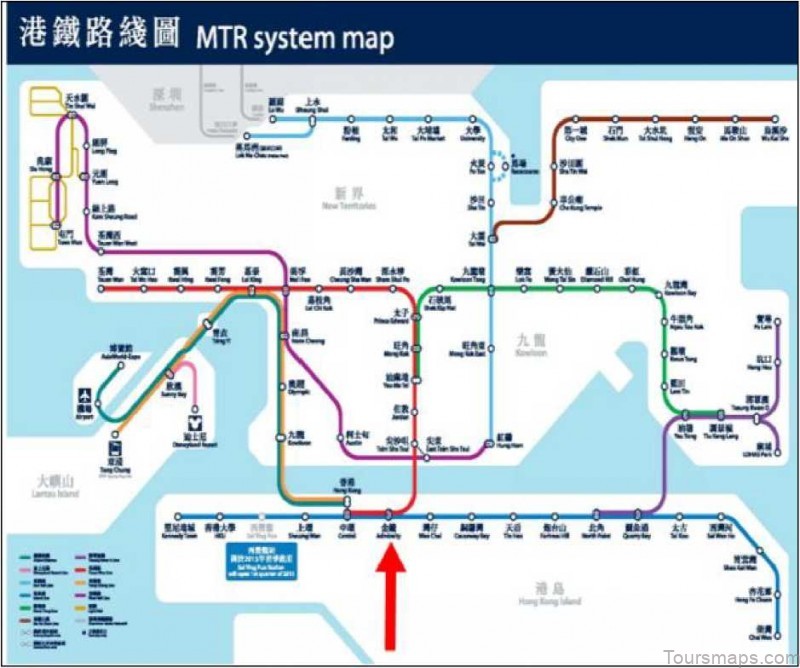 MTR Admiralty Station M$£ is next to MTR Central Station

They are situated at the most bustling downtown in Hong Kong. 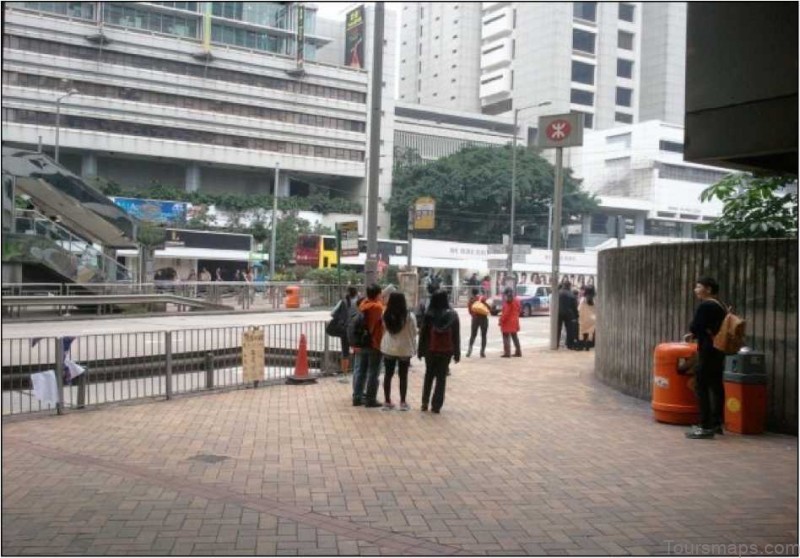 You are looking right from the exit C1 of MTR Admiralty station. 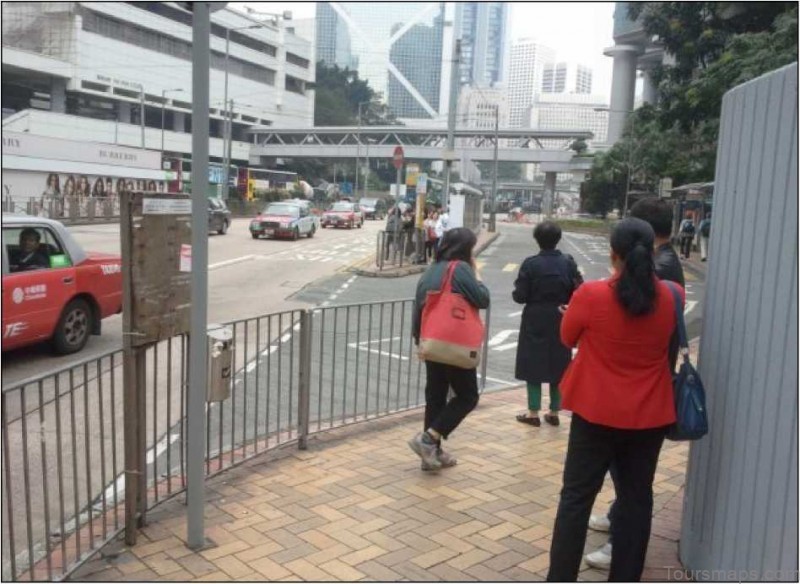 The bus stop of “Admiralty Station, Queensway” is standing on the road. 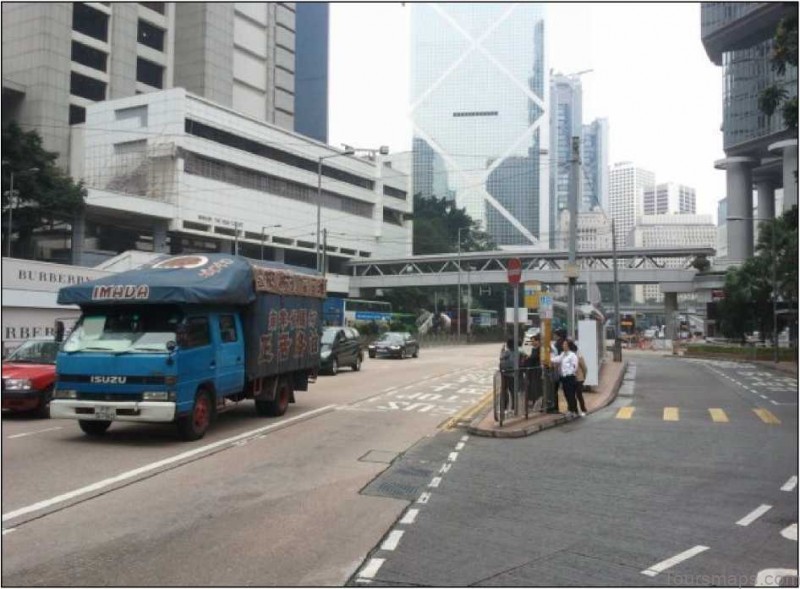 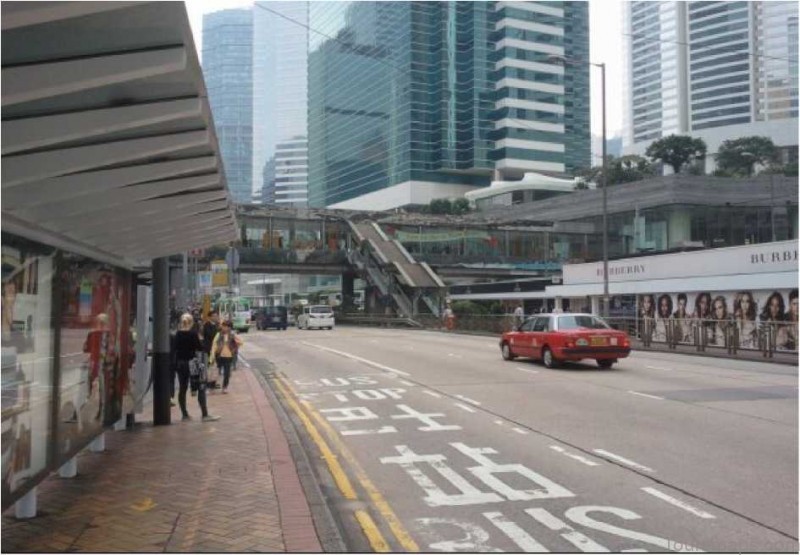 You are standing at the bus stop of “Admiralty Station, Queensway”. 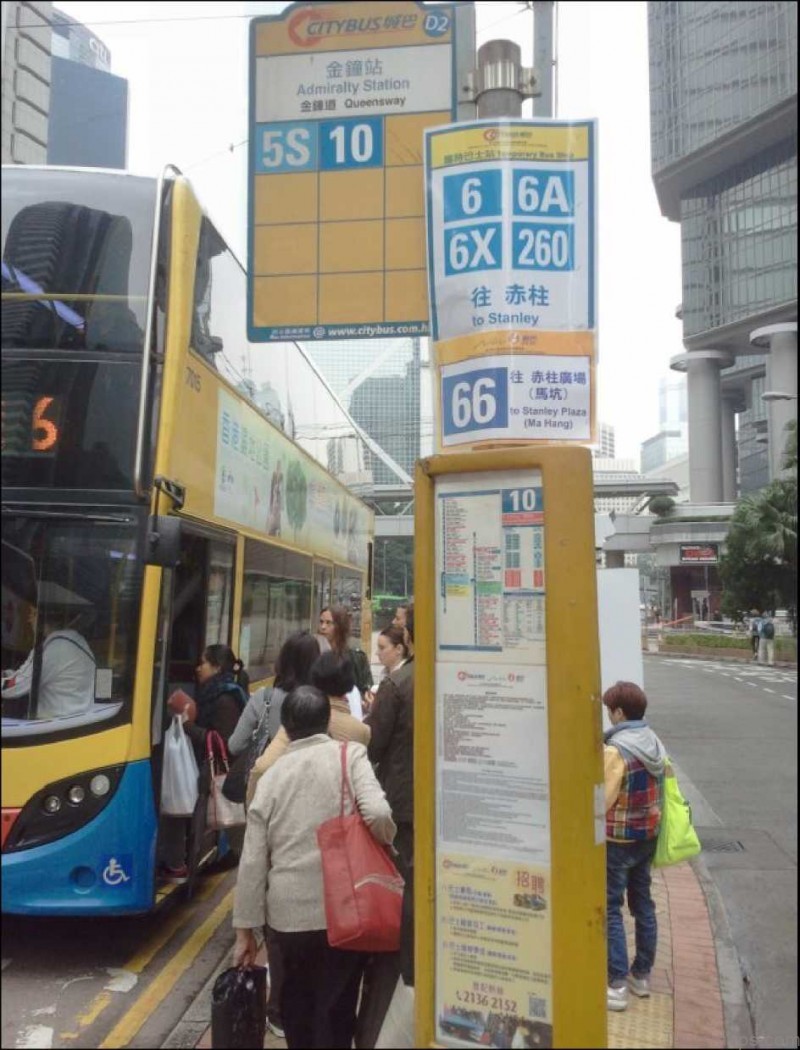 Take a 6, 6A, 6X, 66 or a 260 and alight from the bus at “Repulse Bay Beach”. The destination of all the buses is Stanley. Out of these buses, 6A, 6X and 260 go to Stanley via Deep Water Bay Beach and Repulse Bay Beach. However, bus no. 6A runs only at morning peak time on weekdays and Saturdays. Therefore, it’s the highest probability for you to take a 6X or a 260 for Repulse Bay Beach. No bus here except 6X drops at Chung Hom Kok Beach. 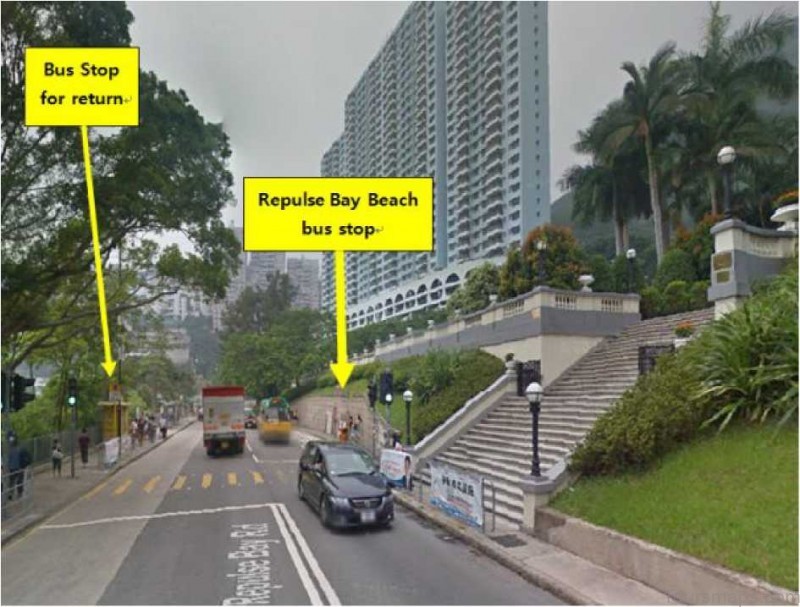 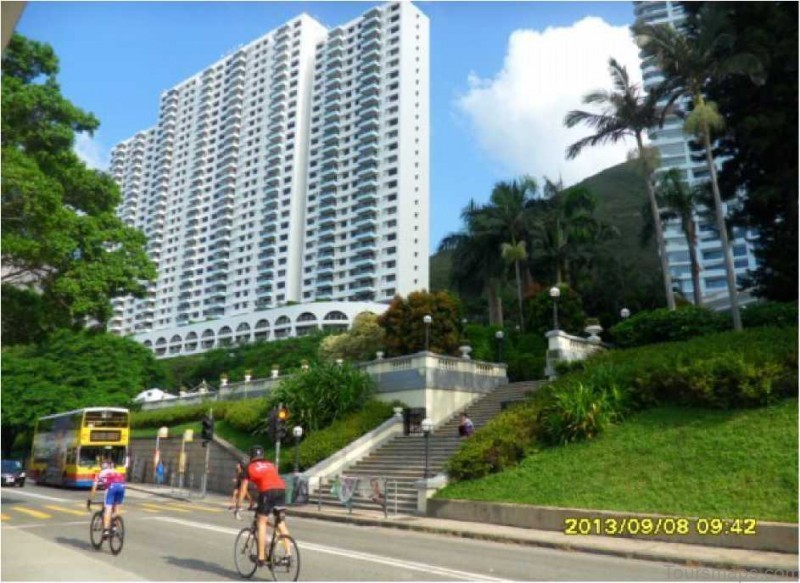 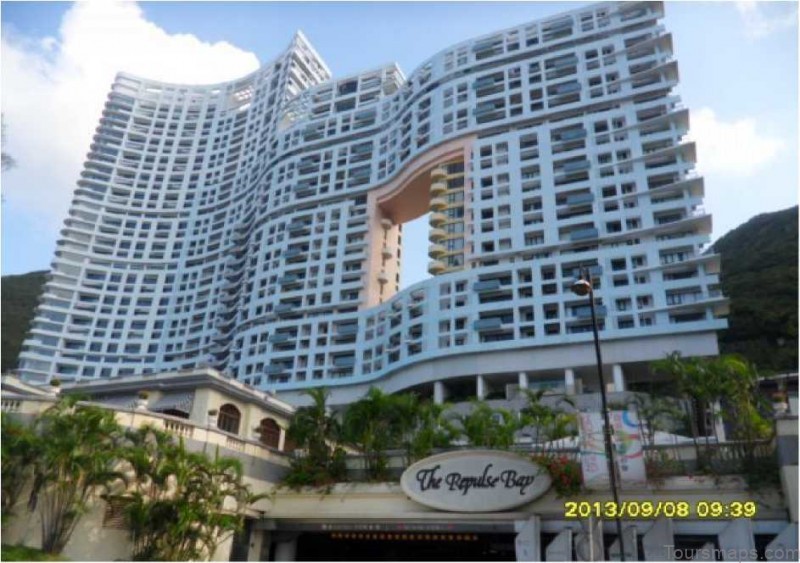 The gorgeous building of “The Repulse Bay” is standing by the bus stop. 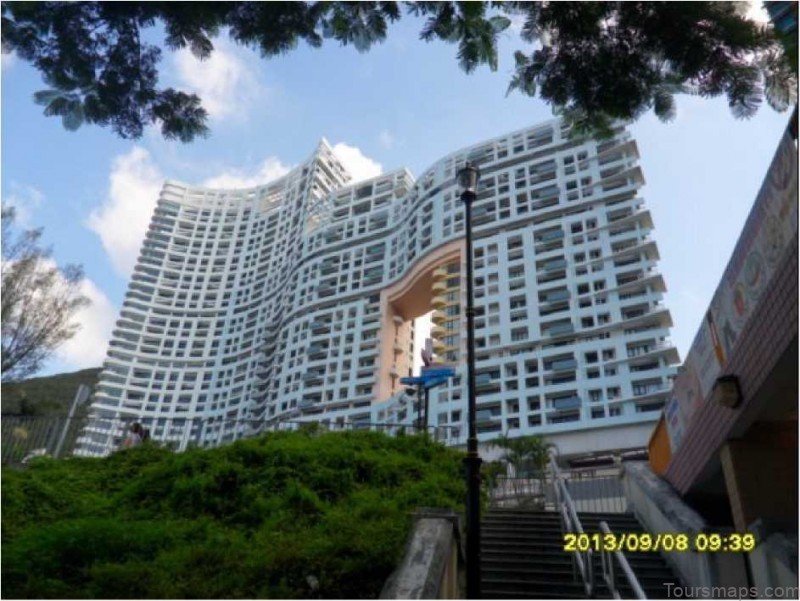 Cross the road from the bus stop and take the steps down to the beach. 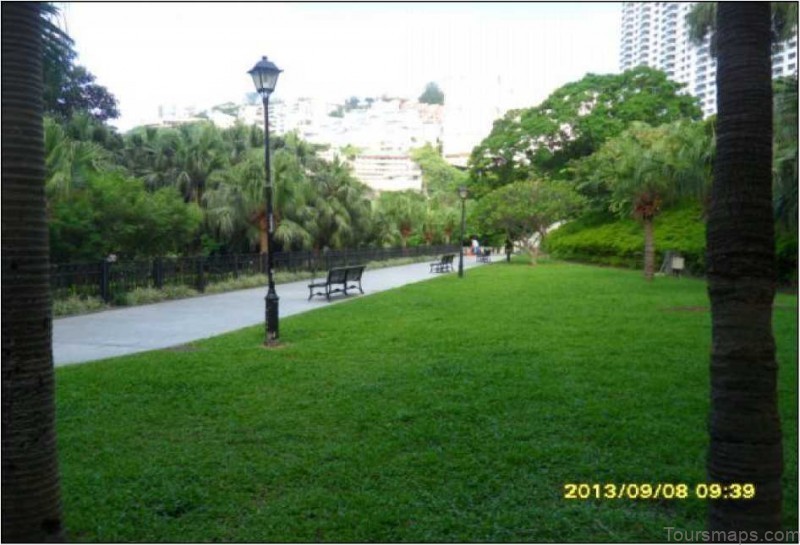 You will meet a small and clean park on the way to Repulse Bay Beach from the steps.

It’s a really clean park you meet on the way to Repulse Bay Beach MB. 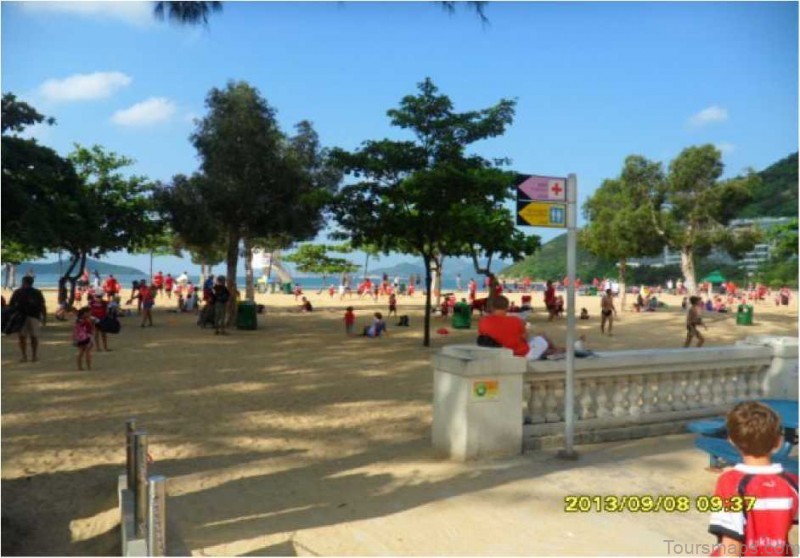 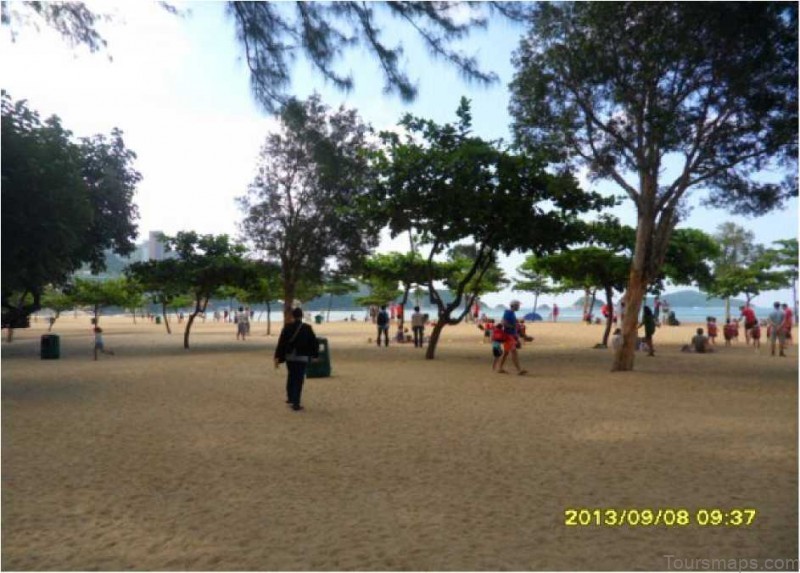 Many trees at Repulse Bay Beach 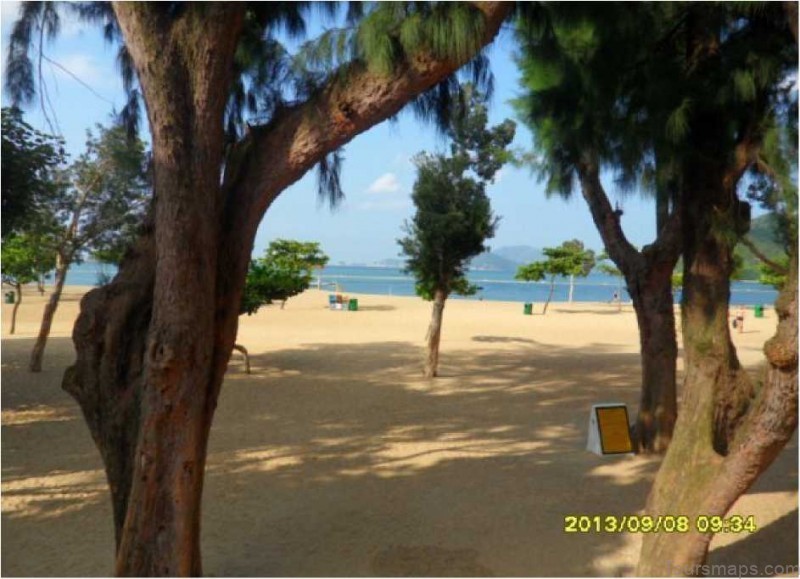 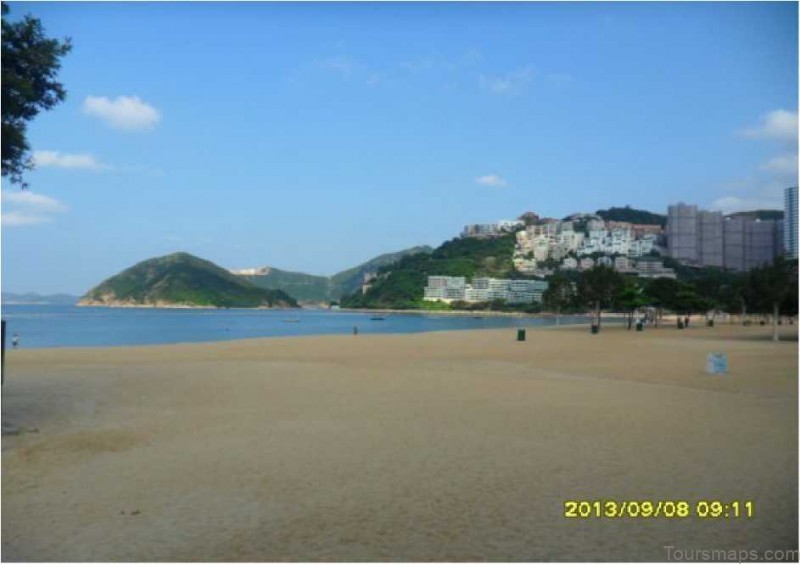 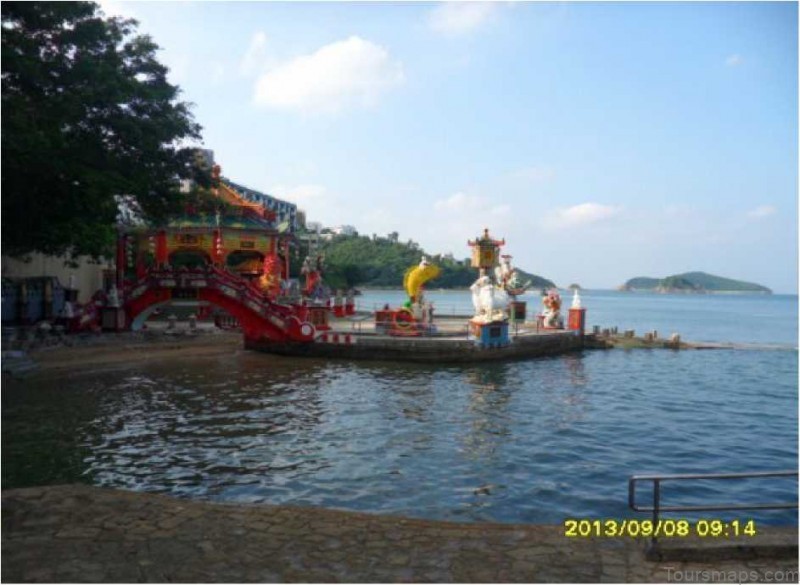 Tin Hau Temple reaching into the sea. It is sitting on the left end of the beach. 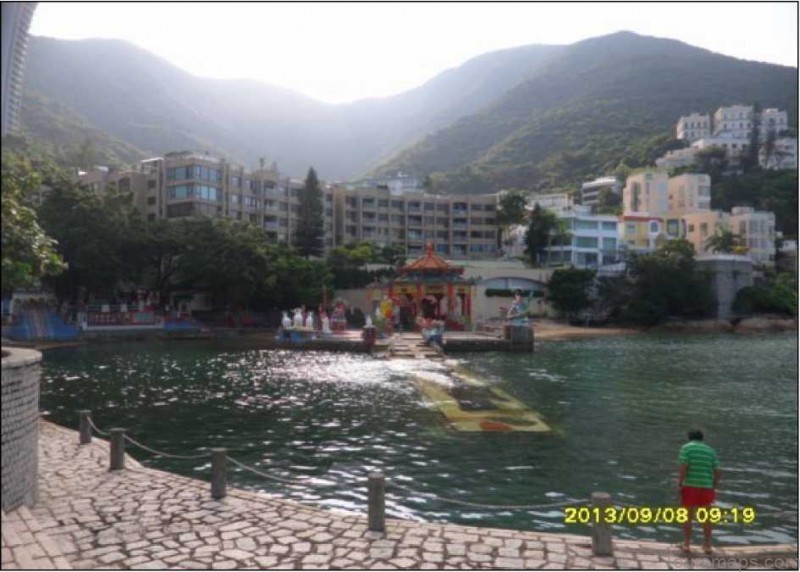 You are looking at Tin Hau Temple from a promenade prepared at the end of the beach. 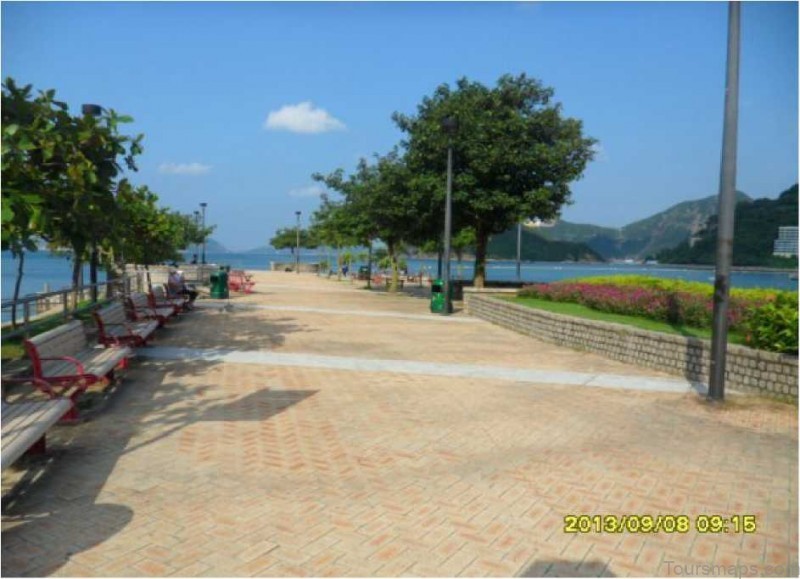 The promenade at the end of the beach goes to the sea. 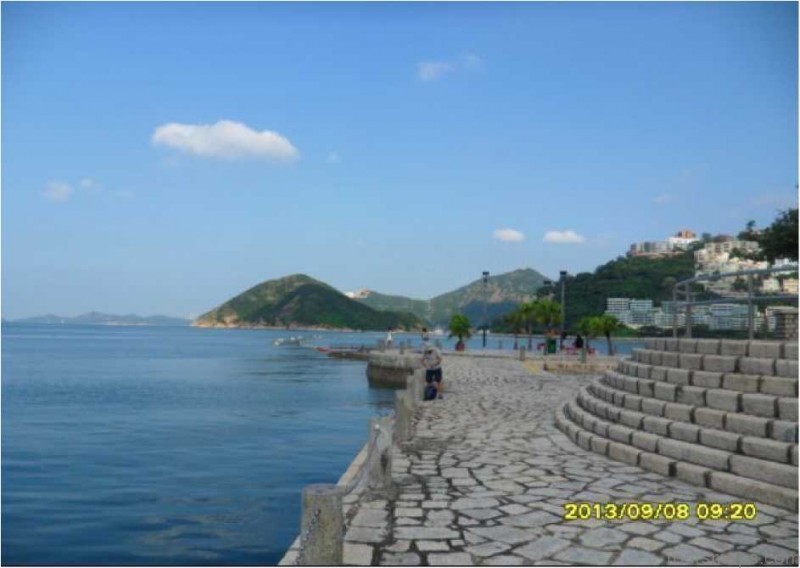 Promenade by the sea 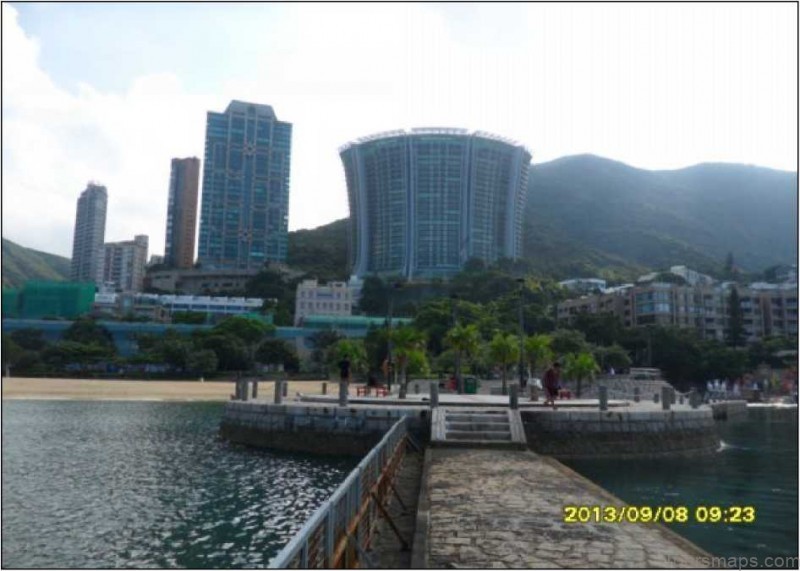 You are looking back at the gorgeous buildings standing behind the temple. 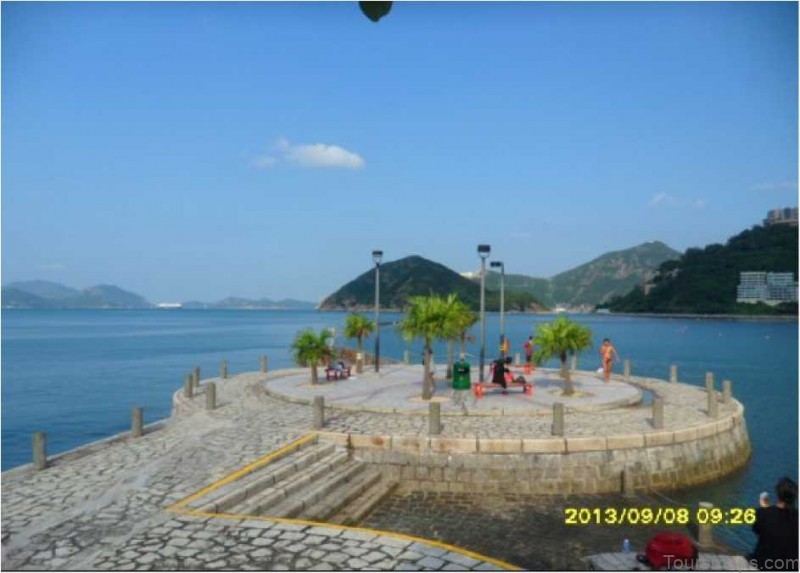 How about to jump down into the sea. 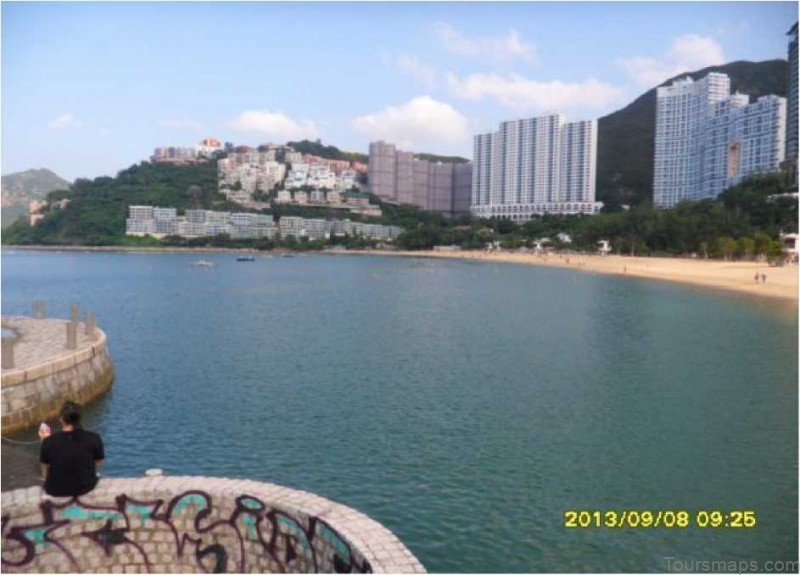 You are looking at Repulse Bay Beach from the promenade. 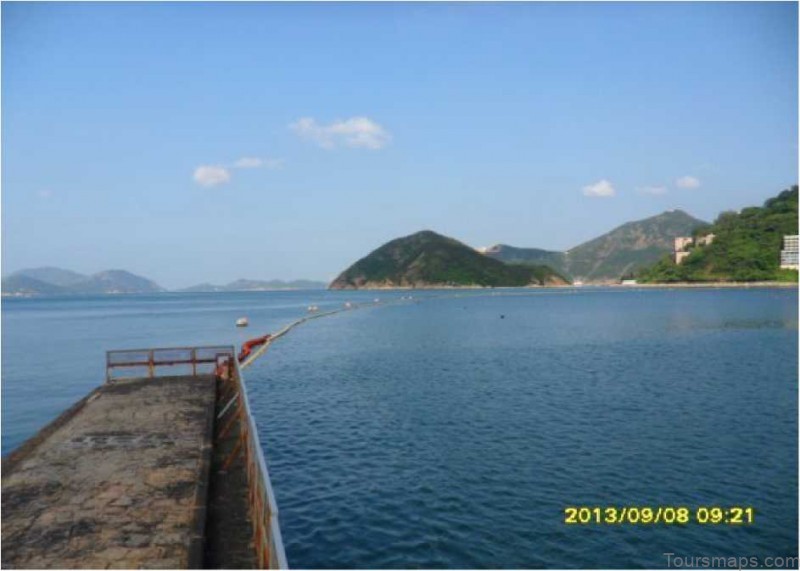 A long shark net is placed on the beach. 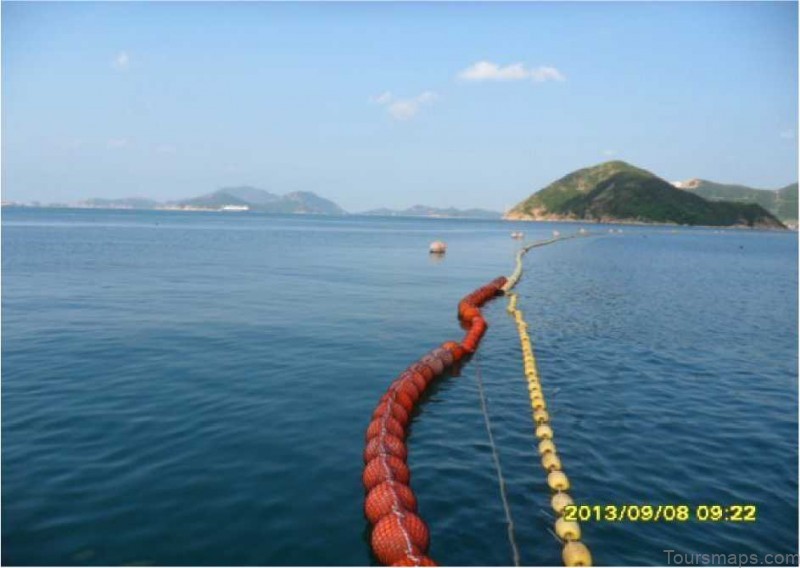 Even a shark net looks beautiful. 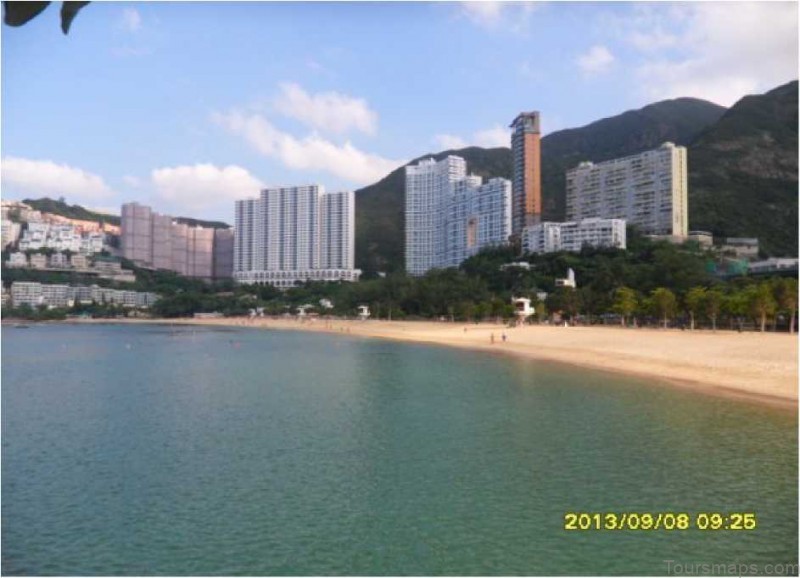 A gorgeous beach of Repulse Bay 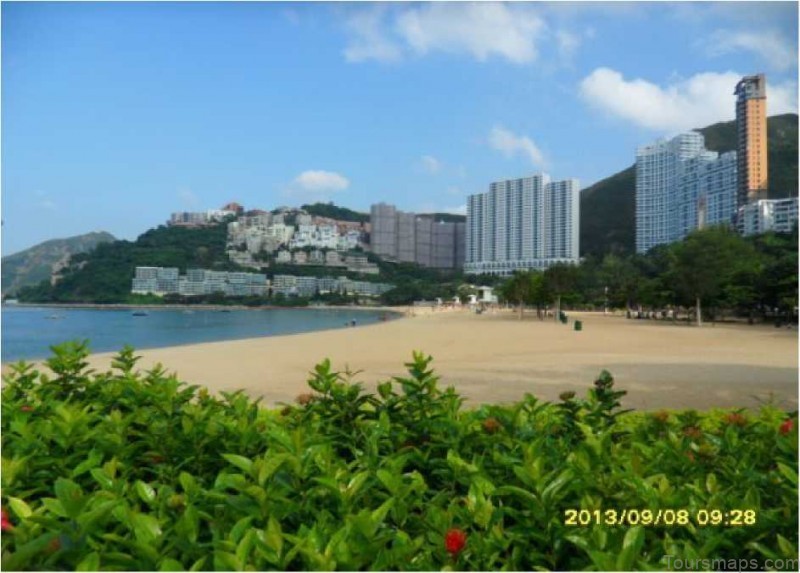 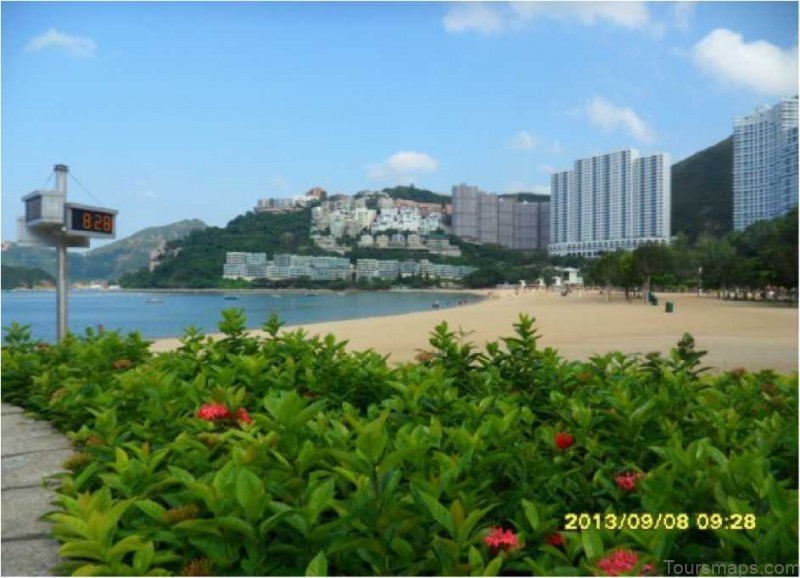 Only take your swimming suit and you can enjoy all facilities at the beach. 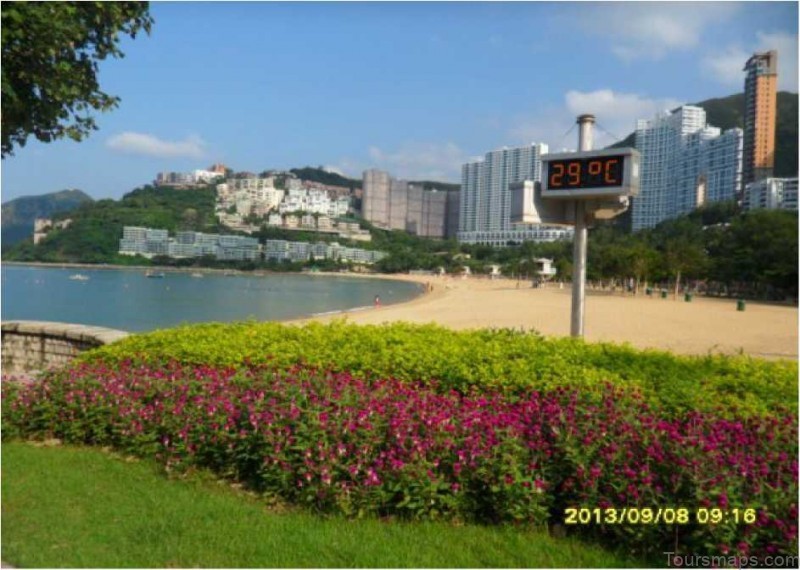