One of the original six major schools of Venice, built in 1260 but was destroyed by fire and rebuilt to its current style in 1485 in a blend of the Renaissance and Byzantine styles. Three famous Italian explorers studied here, Barbara, Contarini and da Mosto. In 1819 it was converted for use as a military hospital, and today is used as a civil medical center.

Exit the piazza near where you entered taking Calle Bressana down to the bridge.

The bridge is named after the surgeon Angelo Minich who left the city £30,000 to be put to good use and ensure that maintenance of the electrical clocks was carried out.

After crossing the bridge continue straight ahead until the T-junction with Calle Santa Maria Formosa, here you turn right and it will take you around into the campo.

There has been a religious building on this site since the 7th century and the current church was started in 1492. The church is blessed with two decorative facades the 1604 Baroque front opening out on to the piazza and the 1542 Renaissance design looks out towards the canal. There are artworks by Palma the Elder, Vivarini and the oratorio, which has a Madonna and child by Tiepolo and the Last Supper by Bassano. 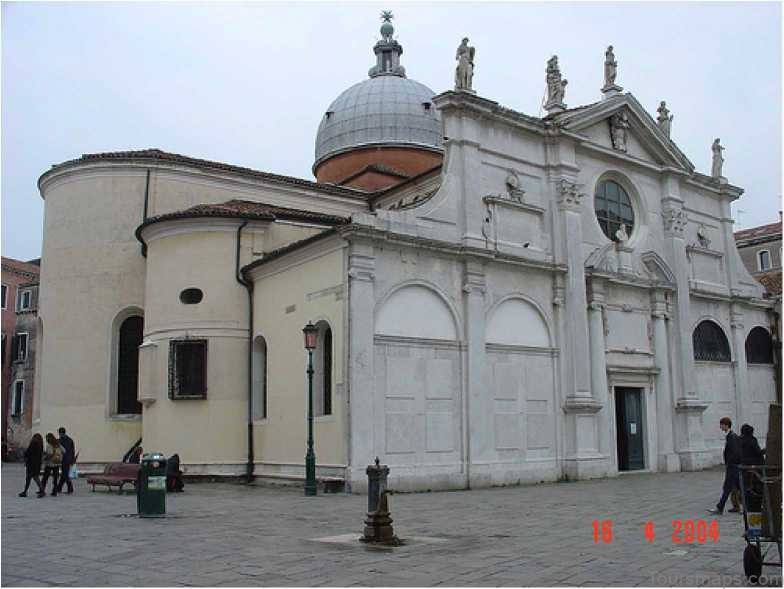 Leave the campo over the bridge and down Ruga Giuffa where you will find the lane leading to the museum 50 meters down on your left.

This old palatial house was bought by the state in 1981 and initially formed the center for the Grimani archaeological collection. The building now serves as an example of 16th century, Venetian style and elegance from a bygone age. The museum is full of antique furniture and everyday objects that perfectly set off the wonderful artistic works that decorate the Palazzo Grimani. There are excellent examples of the Mannerist style by Udine, Salviati and Zuccari.

Walk to Church of San Zaccaria

Once you have had a good look around return to the main road and continue on, until you reach the T-junction with Fondamenta Osmarin, where you turn right. This road leads directly on into the Campo San Zaccaria

The church has a distinctive front facade demonstrating the change between the Byzantine lower and the Renaissance upper levels. The church is dedicated to the father of St John the Baptist, Zaccaria. It was also the nuns from this site who donated the land of their orchard to create the Piazza San Marco.

The church is rich in artistic achievements with three Gothic alter pieces and works by Castagno who is credited with bringing the Renaissance painting style to Venice from Tuscany. The artistic highlight is the Bellini painting of Madonna and the four saints, which was looted by Napoleon and taken to Paris, only to be returned to Venice twenty years later.